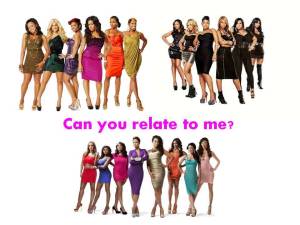 I fell off of the reality TV bandwagon somewhere between Flavor of Love and its spin-off, Charm School. It’s hard for me to sit through an entire episode of most shows, let alone watch an entire season of a reality TV show. With the exception of every Real Housewives franchise (my guilty pleasure), I’ve caught only bits and pieces of most black reality shows from For the Love of Ray J and I Love New York to Basketball Wives and Love and Hip Hop.

I’m not tuned into reality TV every night, but I read blogs every day. Every day I read about the problems with these shows ― how bad they make black women look, that the shows are scripted, the drama isn’t real…and the list goes on. The truth is, if black women didn’t act this way, there wouldn’t be a show to tape and it couldn’t be labeled as “reality”. And surely the millions of people watching these shows aren’t simply waiting for one cast member to throw a drink on another and the cat fight that follows. There is a deeper connection between the viewers and the cast.

I caught a scene from Basketball Wives with Tami Roman talking to her mother about sexual abuse that she experienced as a child and how she resented her mother for not being there for her. I could relate to that because of knowing women, black women, which have gone through the same thing. I recently saw Joseline Hernandez in a scene from Love and Hip Hop Atlanta telling her friend that she fell in love with Stevie J because he took her out of a strip club and gave her a chance. She said that anyone would fall in love with someone who did that for them. I could relate to that too because something similar happened to me. Jim Jones’ mom and his fiancée don’t get along, Phaedra Parks’ husband is an ex-con and who doesn’t have a friend like Mimi Faust?

Regardless of whether or not these shows are scripted or how they make black women look, some of the issues that are addressed on these shows are REAL and relatable and that may be the hold that these shows have on black female viewers. All of us aren’t willing to air our dirty laundry on TV, but some of these women have something in common with some of us and that’s not a problem, that’s reality.

Most of the cast members on these shows have nothing to lose by participating in them anyway. Being on a reality show has given some of them opportunities they may not have had otherwise. I’m just waiting to see who will be the first black female reality TV star to turn that fame into something really real, a la Bethenny Frankel and Skinnygirl Cocktails.

5 thoughts on “The Real on Reality TV”